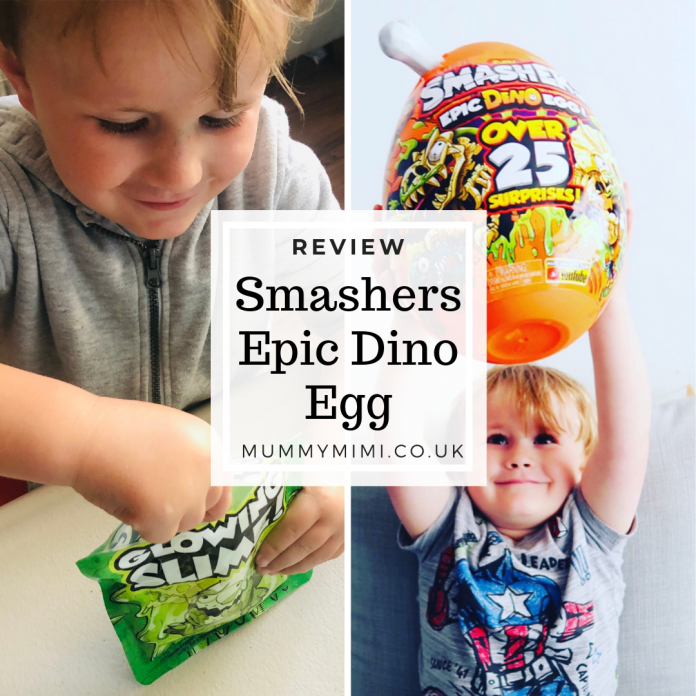 *** AD | Gifted – This item was gifted in return for an honest review, as always all opinions are our own ***

When the Smashers Epic Dino Egg arrived S was so excited to find out what was inside, but he had a few days to wait till the weekend to open it! So after Saturday morning swimming lessons he couldn’t wait to get his treat when we got home. 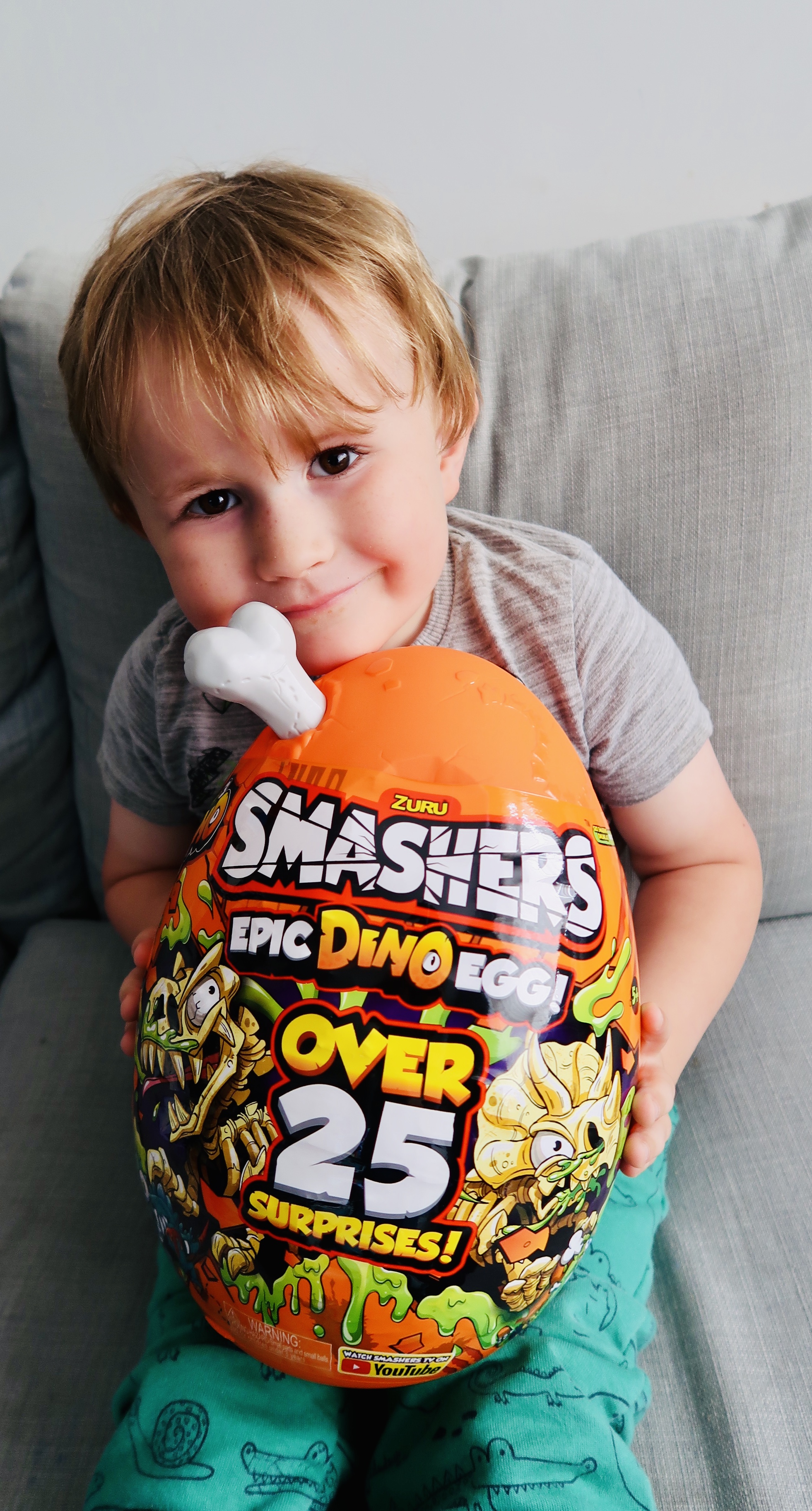 Upon smashing the big egg we discovered the goodies inside plus a scratch treasure map to follow to help us discover the Smash-o-saur Dino hidden in the compound. 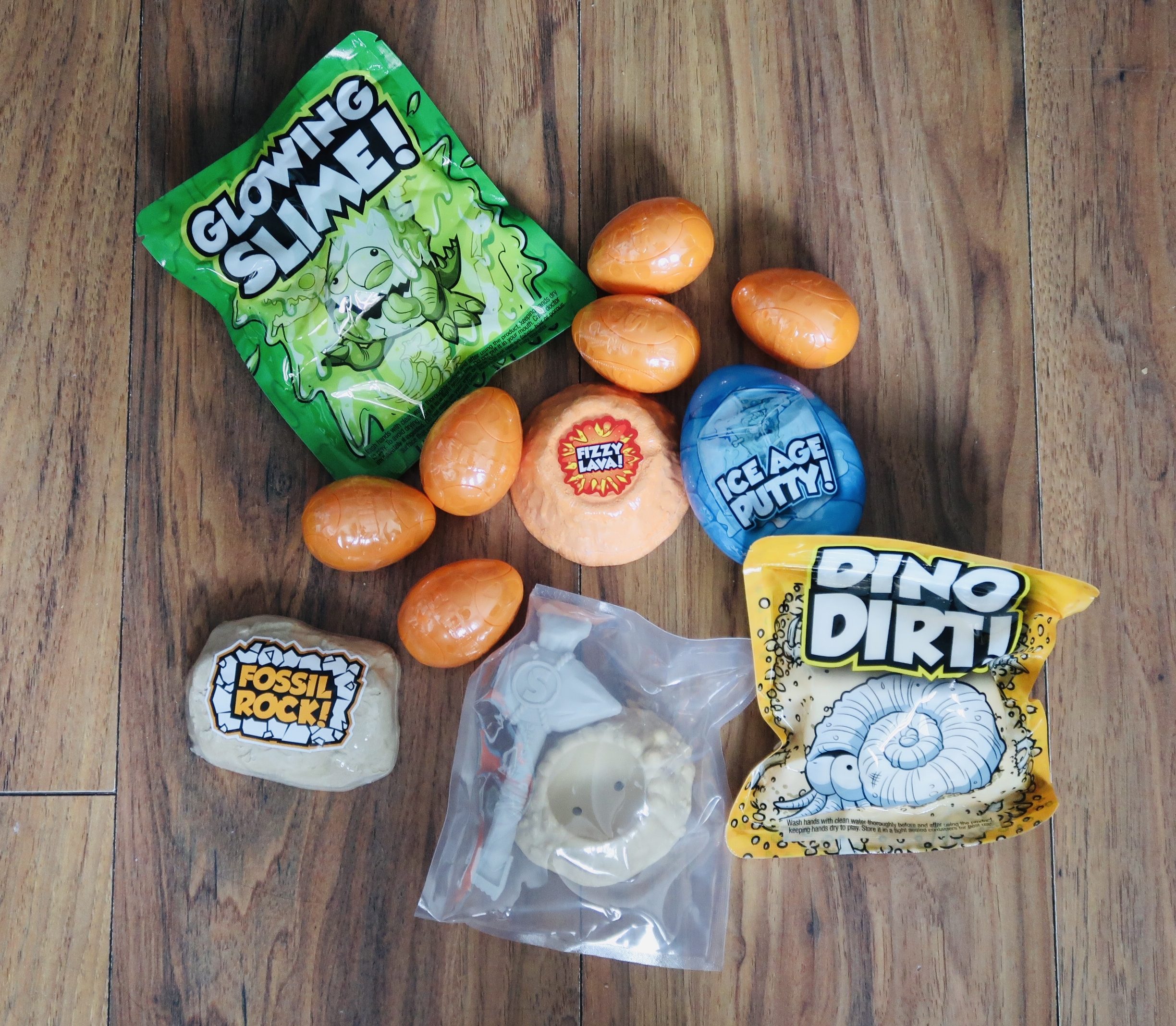 S couldn’t wait to smash the little eggs to see what was inside, soon discovering the characters hidden inside.

After scratching off the first circle at the start of the trial we discovered the first part of our dino was in the Dino Dirt. S couldn’t wait to get stuck in to the kinetic-sand-like-dirt two find the first to parts of our dino.

I can honestly say that the Dino Dirt and the little characters from the eggs kept S entertained for well over an hour that morning as he made up little stories with them and included some of his diggers in the fun. I’ve made sure to store it in a plastic container so it can be used over and over again.

Next on our trail was the Fizzy Lava, this one is probably best done in a container or on a dish so you don’t get too much mess everywhere.

S was excited when the lava started to fizz! 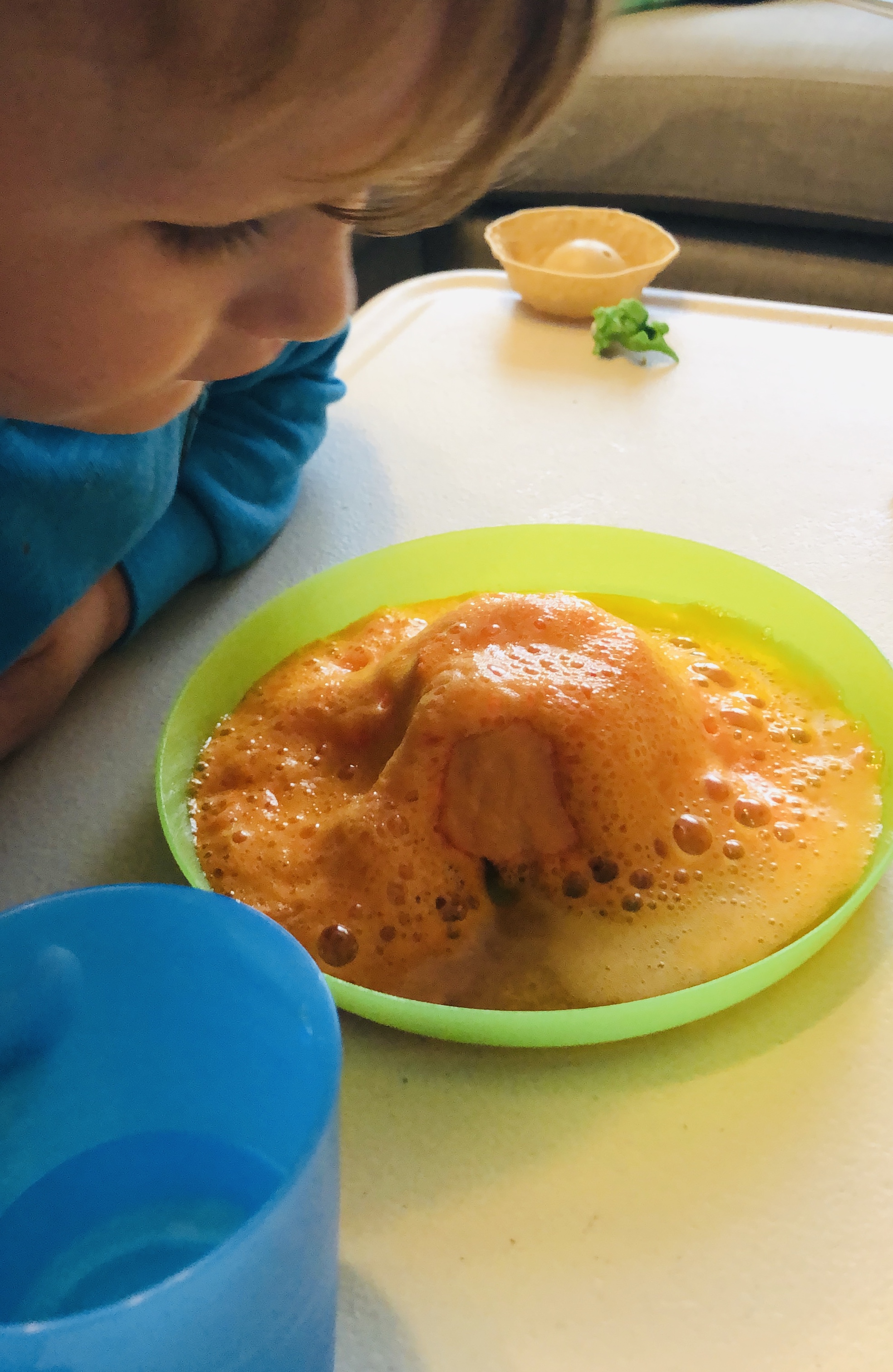 Slime – I mean what kid doesn’t love slime! Look at S’ delight at getting to take the slime out of the packet!

Like the Dino Dirt the slime is good for reusing and keeping the wee ones entertained for a while – the packet re-seals so it’s perfect for tidying the slime away for later. The last thing you want it to end up on the carpet, sofa etc. 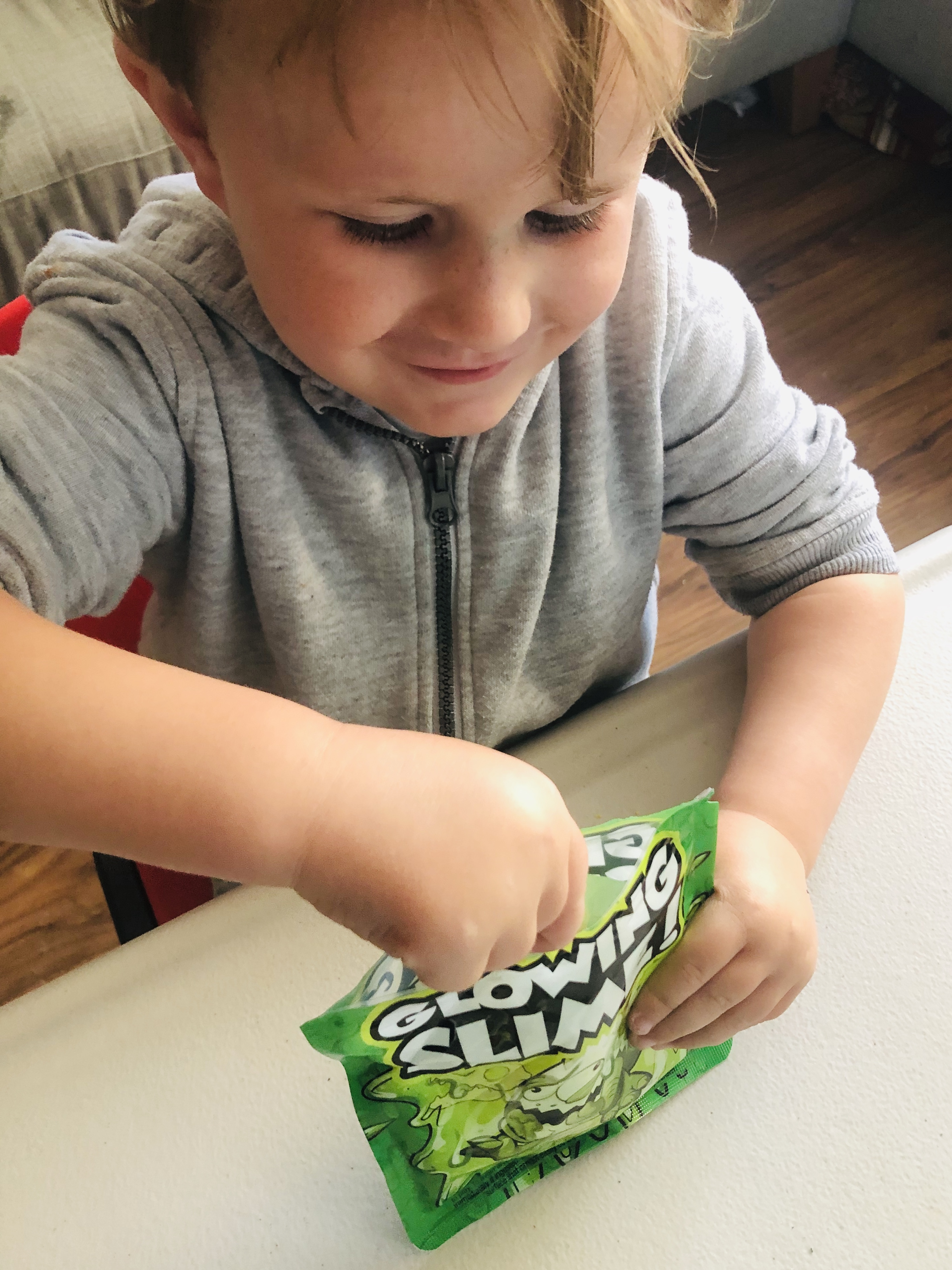 Using the digging tool you need to break through the rock, which was quite tough to get going but with my help we managed to get it started and S couldn’t wait to see what Dino bones where hidden in the rock! 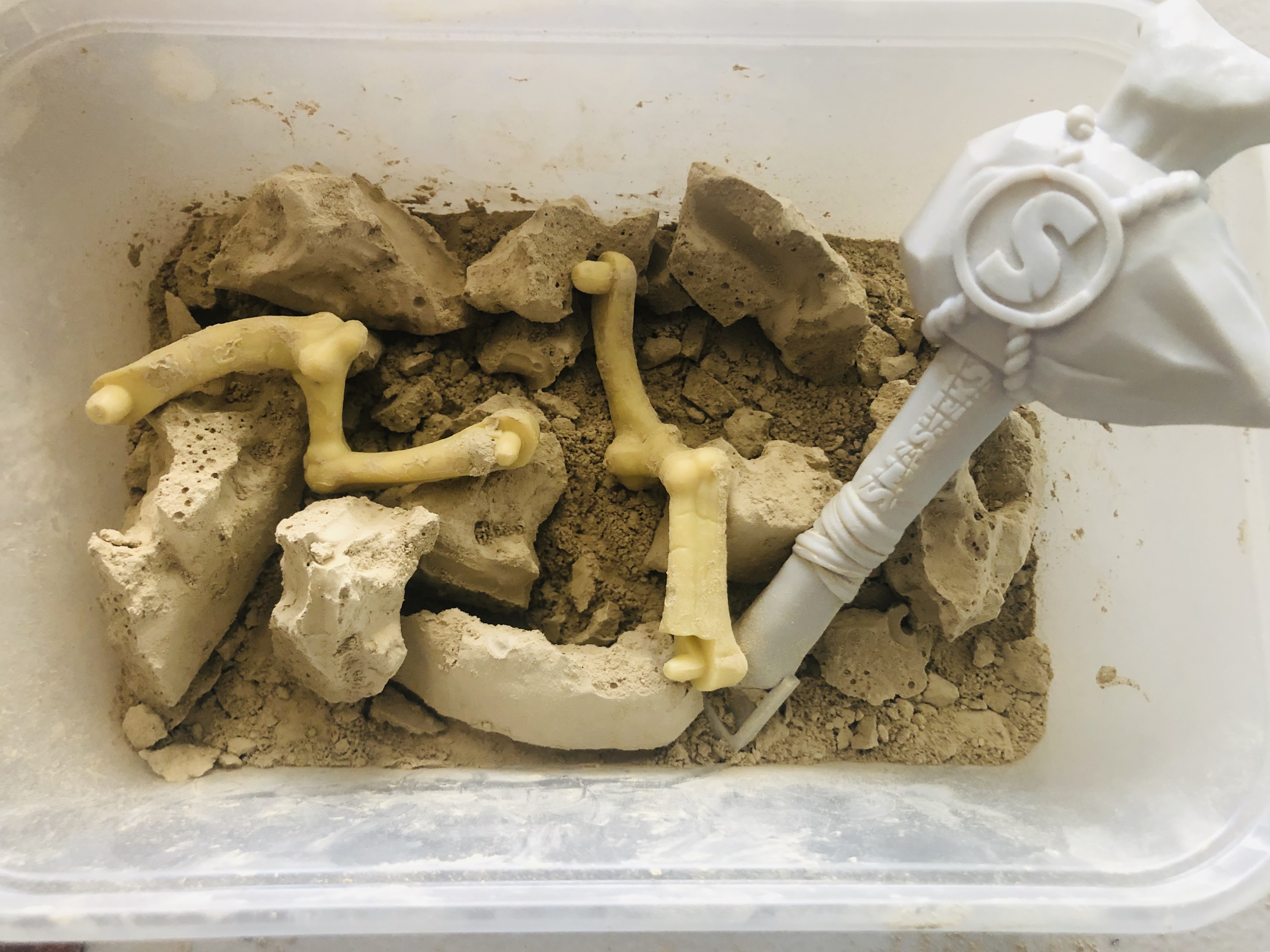 Last up was the ice age putty to get the final part of our dino skeleton, again this putty can be kept in the blue egg packaging and be played with another day. 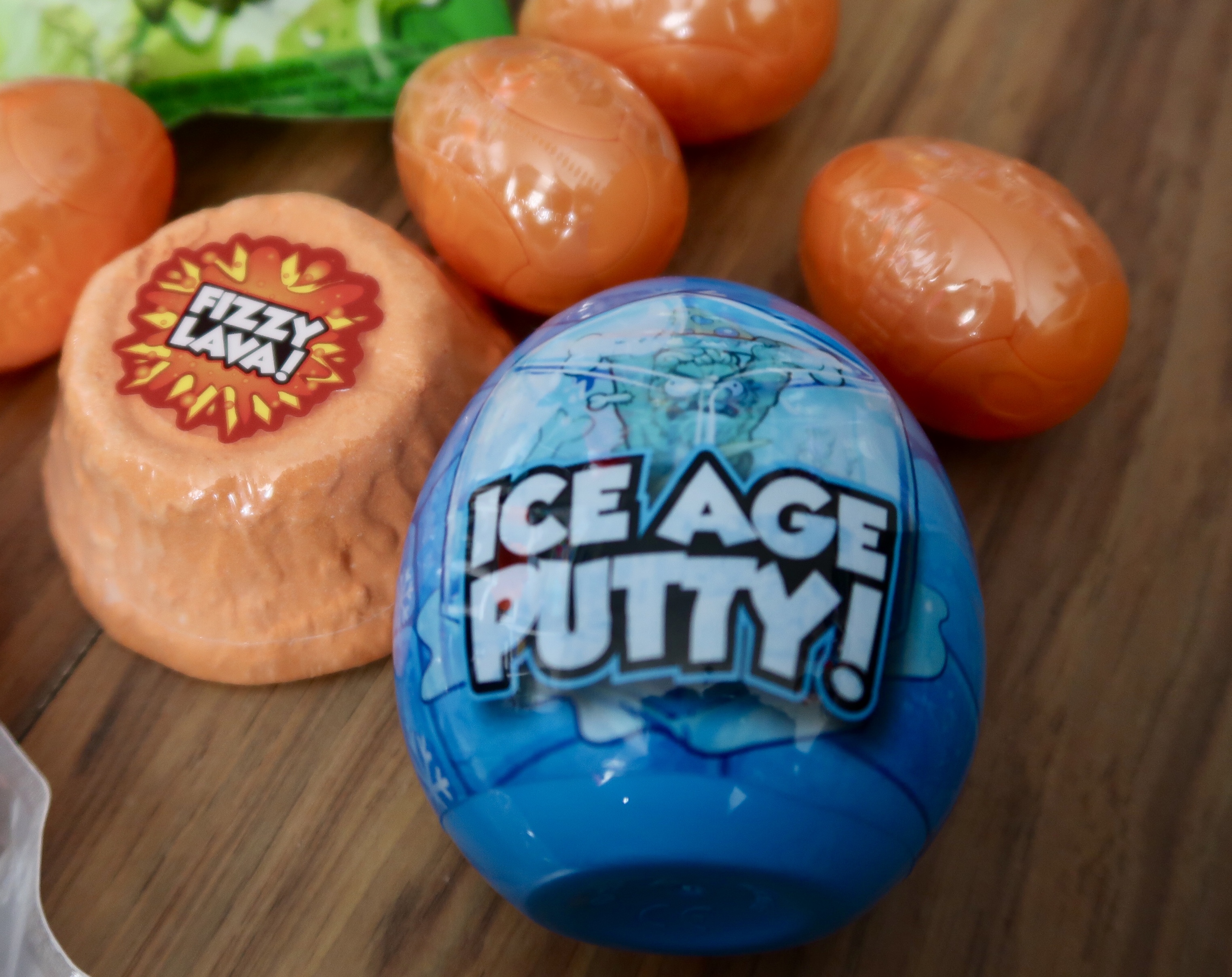 As there are several activities within the egg I decided to let S open one at a time and not use them all at once. This was great for occupying him over several days.

The dino was reasonably easy to build – we did struggle to fit on one of the dino’s feet onto the skeleton.

Also the majority of the items from within the egg are reusable, the exception being the Fizzy Lava, and can either be stored in the packets they came in or stored in plastic containers like we have with the Dino Dirt and Fossil Rock.

S loved playing little miniture dino collectables in amongst the other items in the egg, creating little adventures for them in the dino dirt.

We would recommend the Smashers Epic Dino Egg mainly due to the reusability of the items in the set as well as the time it kept S entertained for!

We were also kindly gifted some more of the little smash eggs  – I know he’ll be wanting more to add to his little collection with his own pennies!

The Smashers Epic Dino Egg retails at RRP: £24.99, and is available at Smyths, The Entertainer, Argos, Tesco, Asda, B&M, SAINSBURY’S Supermarket and all the major retailers.

At the time of writing (July 2019) Smyths currently have the Smashers Epic Dino Egg on sale for £19.99 – perfect for keeping the kids entertained over the school holiday!

You can find out more about the range over on – https://smashersworld.zuru.com/

Let us know over on our Instagram post if your wee one has the any of the smashers range or if you think they’d love this set!