We are lucky to be part of the Chad Valley Panel and S was excited to receive his latest Chad Valley delivery to review! 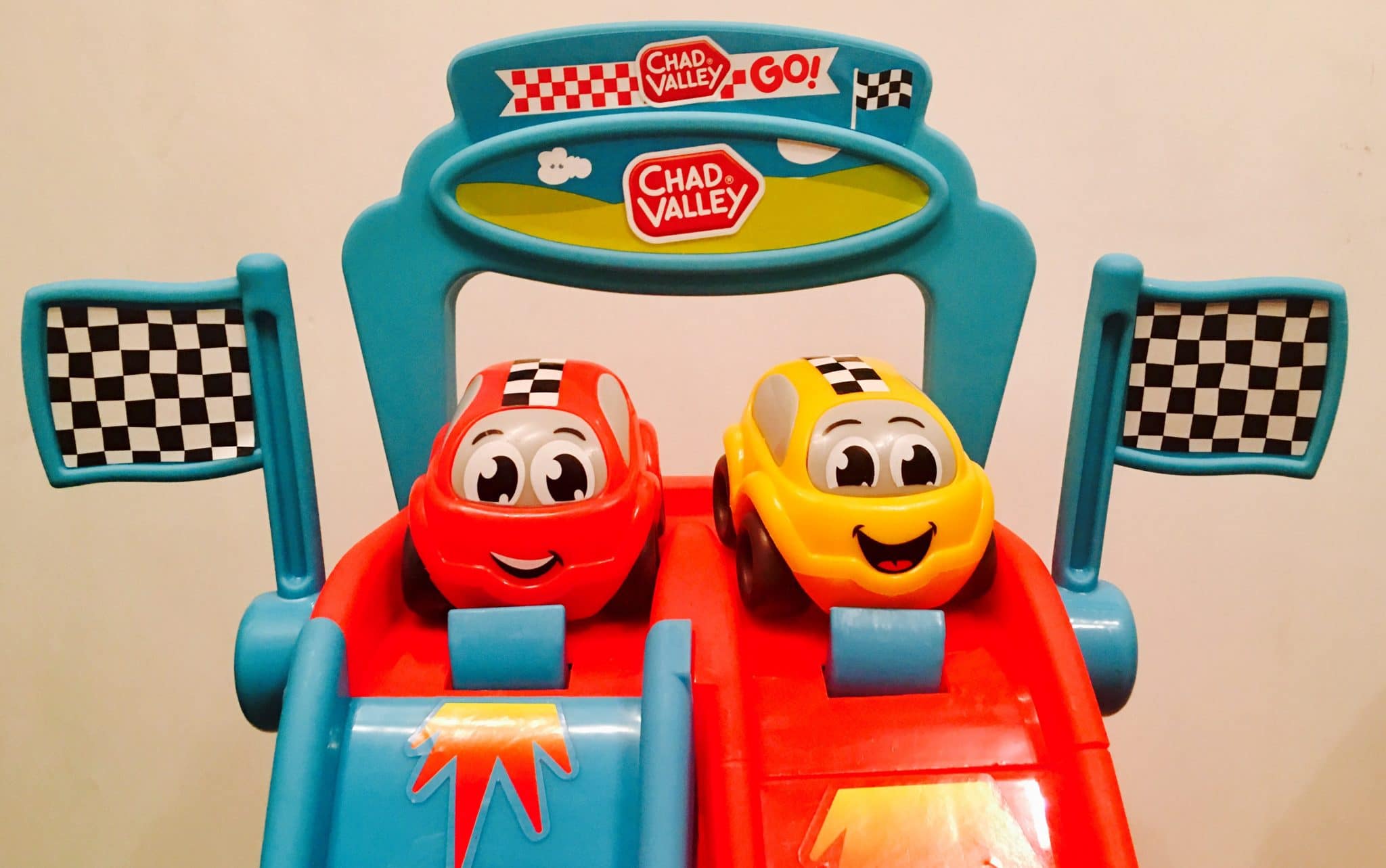 His eyes lit up as soon as he seen the cars on the box! For a car daft toddler the Chad Valley Mega Jump & Loop Track Set was always going to be a hit.

As there was some assembly required the promise of the ‘baba car track’ being all set up and ready to play in the morning was enough of an incentive for S to go to be (and stay in bed!) without much fuss! 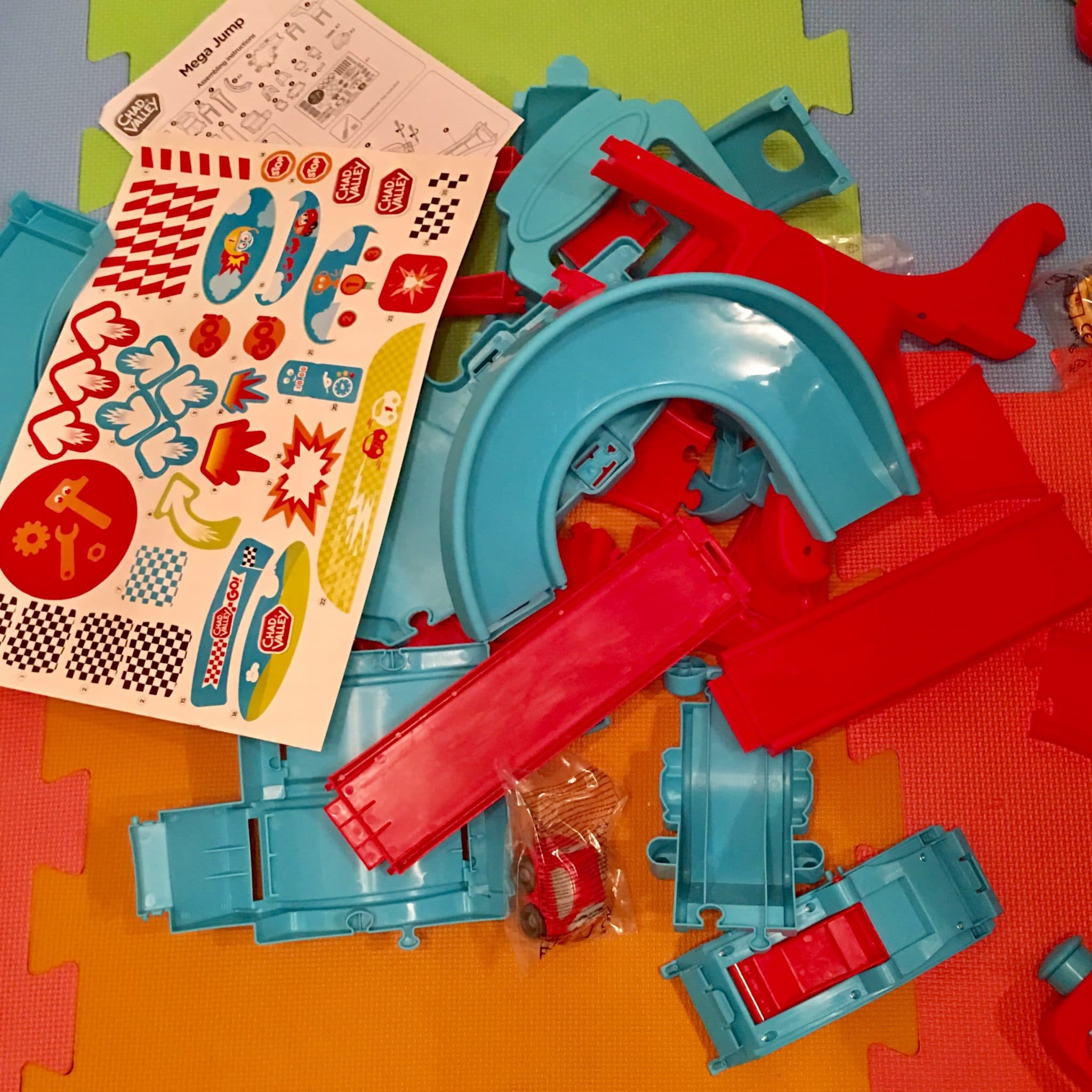 There is a bit of building required, but once you got going with the assembly instructions it was easy enough to build.

As someone who doesn’t usually apply the stickers which come with toys, applying the stickers took the longest time required – but that could also be because I wanted them perfectly in place!

Overall I think it took about 40 minutes for me to assemble, whilst also watching a bit of TV so can be done in less time. 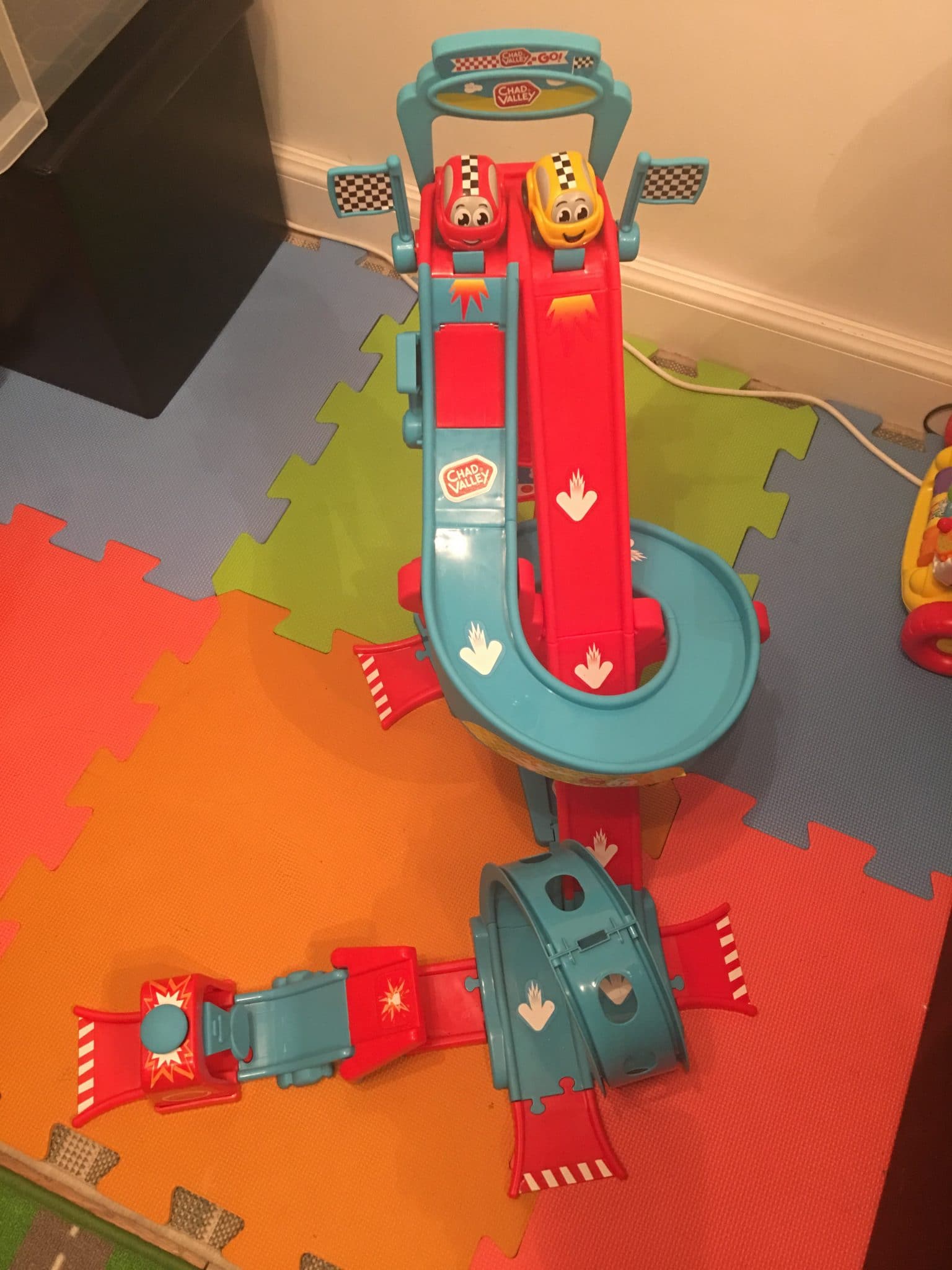 In the morning S couldn’t wait to go through to the living room and see his new toy all set up. We happily spent most of the morning playing cars! 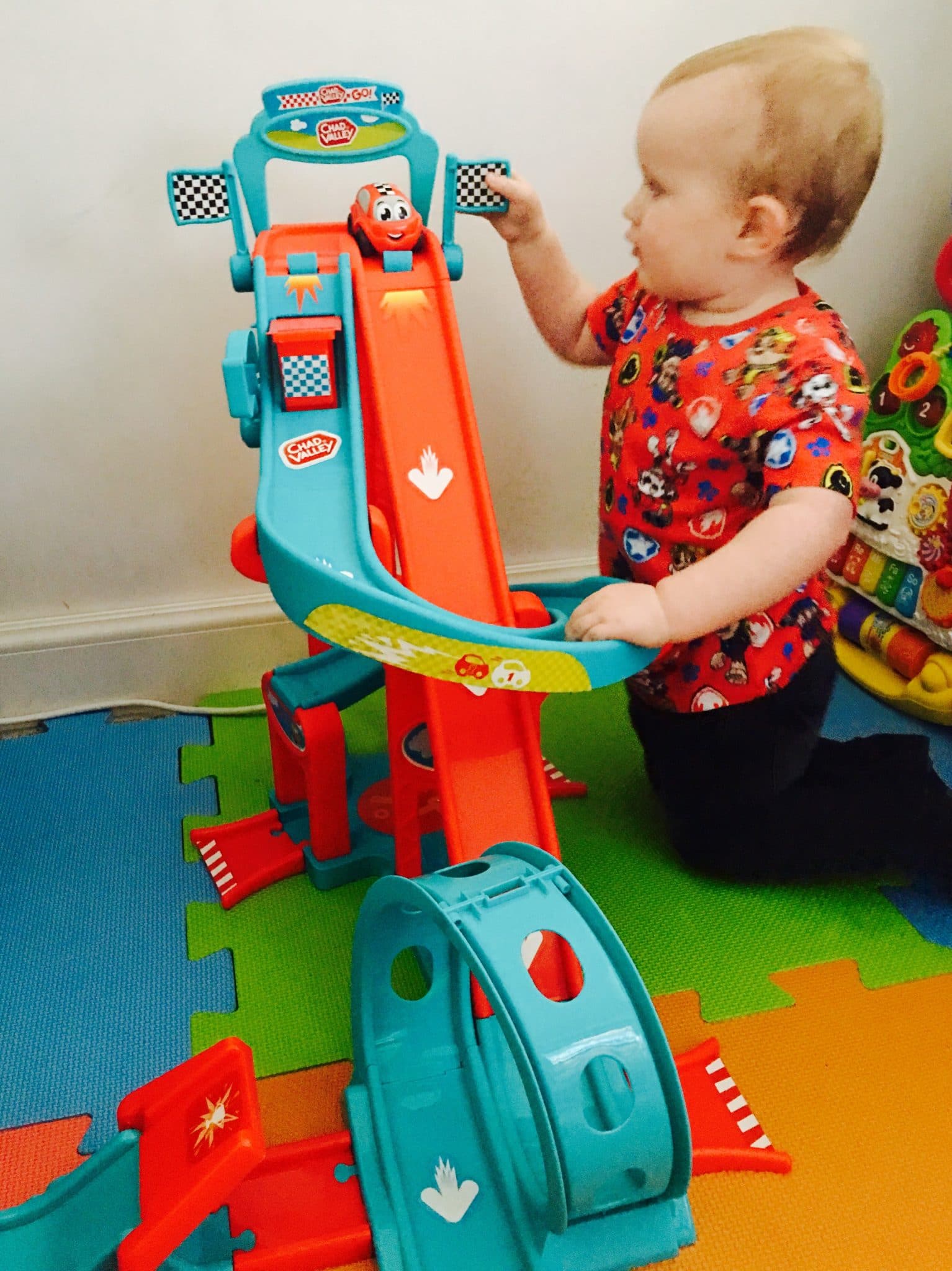 The two cars sit at the top of the track and when you are ready to release them you simply move the race flag forward. Both cars set off and race to see which gets to the bottom first!

One drops down a sheer drop before looping upside down, the other heads round the bend and appears down the side.

There is also a stunt jump, where you place the car behind the leaver, press down and it sends the car flying through the air!

Every day since we assembled the Chad Valley Mega Jump & Loop Track Set, it has been S’ go to toy of choice! And of course he wants to show you the tricks he can do with his two cars – but is not so keen when you want to have your own go!

Chad Valley toys are exclusive to Argos stores, you can currently pick up the Chad Valley Mega Jump & Loop Track Set for only £22.49! For any car loving kid this would be the perfect addition to their toy collection.

You can also buy a set of six additional Chad Valley Mega Jump Vehicles to use along with the track – currently only £8.79 or part of the 2 for £15 range! 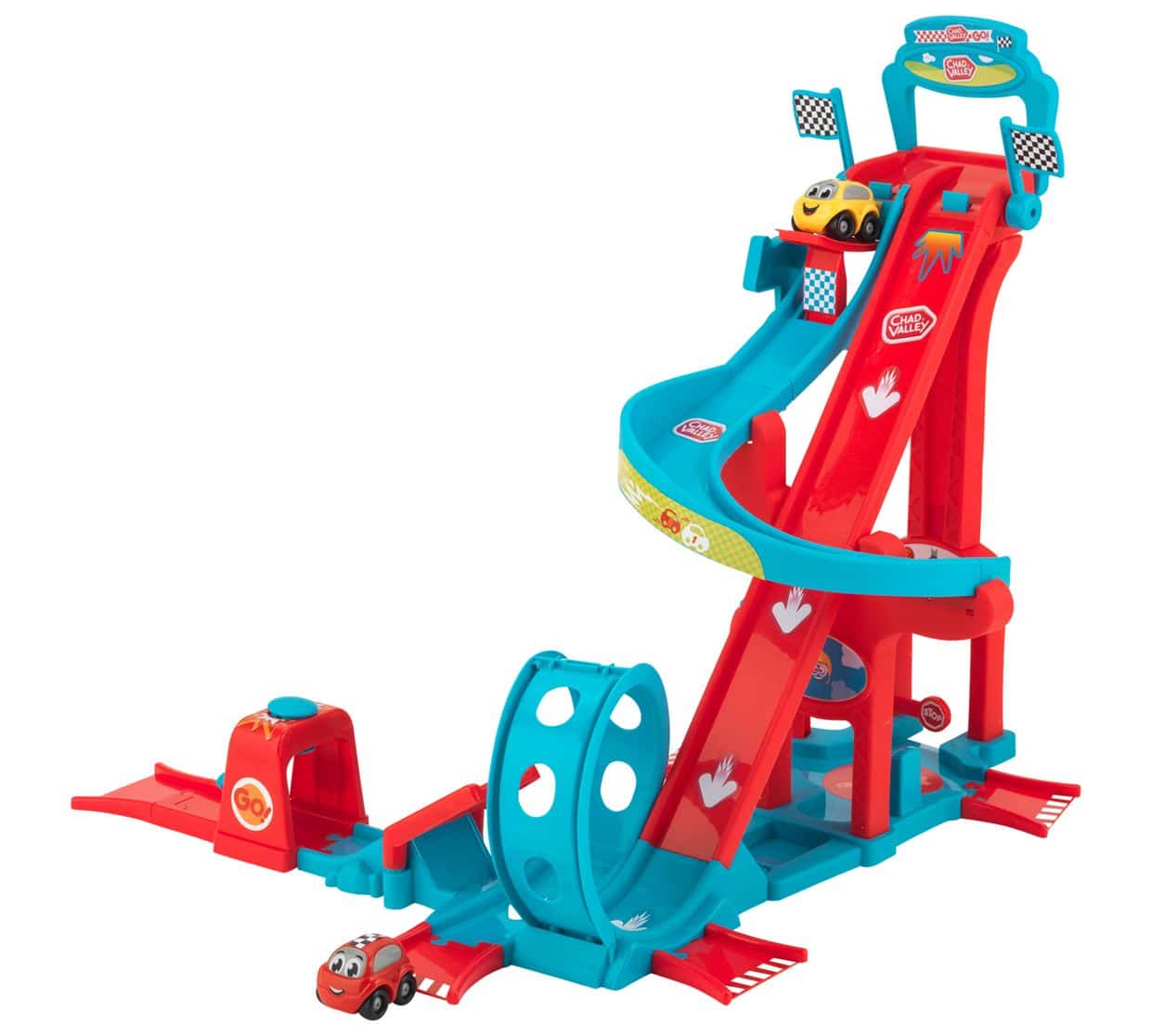 S loves his latest Chad Valley toy, if you would like to see more of their fantastic children’s toys you can also check out our other Chad Valley reviews of the Chad Valley Giraffe Popper and Chad Valley Car Transporter!

*** We received the items in return for an honest review, as always all opinions are our own ***

MummyMimi.co.uk is 4! | Little update and time for a mini break